Fall fashion is calling and we’re showing you how to put together the perfect outfit with Punkabilly Clothing. Here’re 3 fall fashion ideas we’re loving.

Fall fashion is upon us. It’s time to bust out the sexy black boots, leather jackets, and all those figure flattering pants. A lot of rockabilly fashion lovers aren’t sure how to transition their summer wardrobes into fall, so we’re here to help! We’re showing you some of our favorite fall fashion ideas with Punkabilly Clothing and teaching you how to transition your wardrobe so you can still bust out those rockabilly dresses. 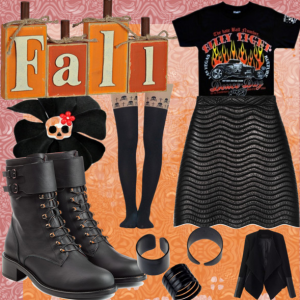 If you’re looking to style your rockabilly favorites into something a little more professional, this fashion find is for you. We’ve paired out Billy Eight racing tee tucked into a rippled leather skirt. The detailing on this skirt makes this outfit figure flattering on all sizes. Pair your outfit with a sharp blazer, combat boots, cute tights, and modest rockabilly accessories for an office outfit with a twist. 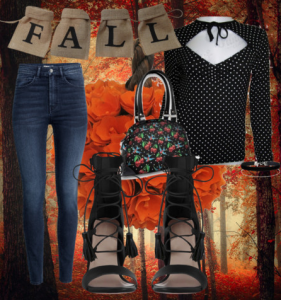 This fall fashion idea is definitely rockabilly chic. We’ve paired this sexy polka dot long sleeved shirt with some high waisted denim for a casual chic look. Use cute bangles and open toed strappy shoes to add a little extra flair to this everyday look. The tattoo inspired rockabilly purse and keyhole neckline on the shirt give this easy outfit a little extra va-va-voom! 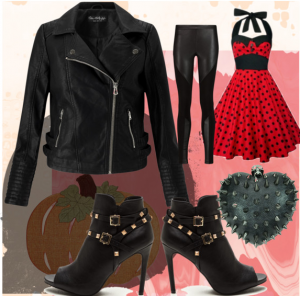 Fall Fashion Idea #3 – How to wear a dress in Fall

A closet full of summer dresses should never be hidden away during autumn. The easy trick is to pair your rockabilly dress with a long sleeve sweater or jacket. Wear thick leggings and high boots under the dress to protect your legs from chilly weather. In this Polyvore outfit we’ve paired a red polka dot rockabilly dress with pleather leggings, a leather jacket, and stylish studded boots.

Fall fashion is one of our favorites. Chilly weather should never mean the death of your rockabilly wardrobe! Throw your hair into rockabilly victory rolls and paint on your favorite pin up makeup to really spice up your outfit and make your summer wardrobe transition into rockabilly fall.

Ads from the 1950’s were truly hilarious… or do we mean terrifying? We’re showing you 6 sexist, awful, and just plain weird hilarious vintage ads.

Vintage ads of the 1950’s and 60’s were gems that would never be run today. This is usually because they were so ragingly sexist, or just plain terrifying. Just wait for melting baby ad – you’ve been warned!

While looking back on these hilarious vintage ads, we hope you appreciate just how far we’ve come in society.

No longer do you have to sew your wife’s head to a rug, or stare at sexually charged toothpaste ads. 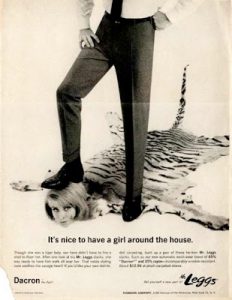 Mr. Leggs men’s slacks ad is possibly one of the most overt sexist ads from the 1950’s/60’s. This ad features a woman’s head attached to a tiger skin rug. The tagline reads ‘It’s nice to have a girl around the house.’ Ick. The message? Men who wear these slacks will become psychotic murderer taxidermists. Or maybe not. The awful message actually says that men who wear these slacks will be superior to women. Maybe try rockabilly men’s clothing, instead? 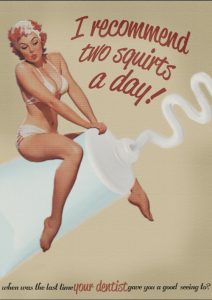 This ad features a pin-up girl showing off her assets while a bottle of toothpaste empties itself suggestively. The tagline? “I recommend two squirts a day!” I bet you do, Mr. Dentist. I bet you do. 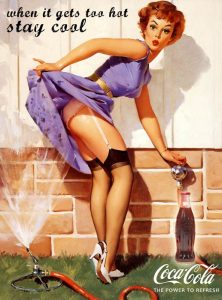 It was in the 1950’s that advertising really took off. Propaganda went crazy and the industry truly learned that sex sold big. This ad features a woman showering her bum with sprinkler water because it’s just too hot! She should have had a Coca-Cola instead. Whoops. 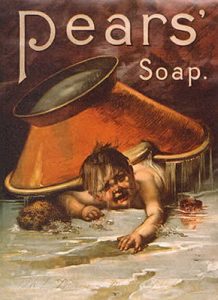 This is one of our hilarious vintage ads that is nowhere near hilarious. In fact, it’s horrifying. This soap ad features what clearly looks like a melting baby being scalded by his tipped over bath water. If there was any indication you should keep your children away from this soap brand, this is it. 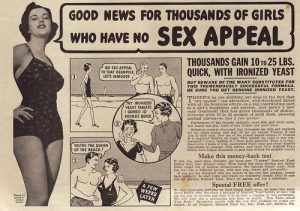 The 1950’s were truly a strange time for ads. This hilarious vintage ad targets skinny ‘unattractive’ women to take ironized yeast. This yeast will make her grow breasts and become curvy and attractive. You know, allegedly. 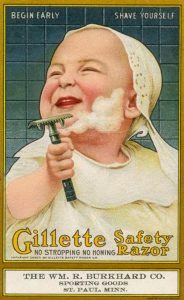 Excuse us while we collect ourselves… from all the screaming we were doing. This is a terrifyingly hilarious vintage ad that features a creepy baby shaving. Apparently, this razor is so safe even your baby can use it. Need we say more?